If you played a game of word association and someone said ‘Indian crime syndicate’, I would be willing to bet my imaginary mortgage (remember I am a millennial, we rent things) on the fact that your response would not be ‘cocktail bar’, bear with me though, it will all make sense. Many years ago, Lady Charlotte fell for underworld boss Vijay Kapur, who is rumoured to have run his entire enterprise from his parlour in Lokhandwala in Mumbai. Plotting the demise of some poor soul or cooking up a money-making scheme often revolved around liquor and, just like that, it all starts to make sense. Located on Charlotte Street, Vijay’s Lounge is inspired by his drinking den, a place where one steps into the mysterious world of Mumbai’s shot callers. When an email landed in my inbox inviting me to do just that, there was no way I could say no.

You enter through a separate door to the Lokhandwala restaurant and head up a stair case before entering the bar. I half expect someone menacing to open the door and demand a password. The first thoughts upon entering are that this really does feel like somebody’s home, the bust on the mantelpiece adorns a tie, the cushions on the sofa aren’t perfectly positioned and the books are strewn across the table. It is almost as if somebody left in a rush, perhaps Vijay running from the police? 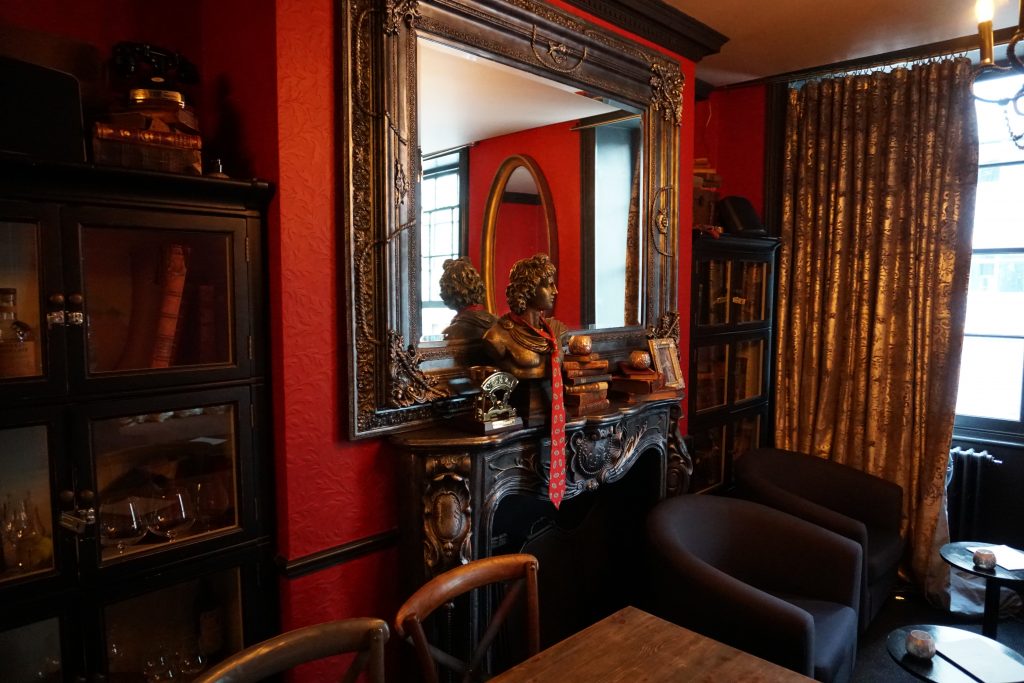 The cocktail menu is concise but is littered with an array of unusual ingredients including cashew syrup, goji berry bitters and violet perfume that is just begging to be relabelled as Lady Charlottes violet perfume . It has to though doesn’t it? The cocktail scene in London has exploded in the last few years and many sit proudly on the list of the best in the world. The secret weapon here is the little rooftop terrace and whilst it is only big enough to seat a handful of people, it is a calm oasis within the busy streets of Fitzrovia. Things start with the ‘Star of India’, which the bartender tells me is the house speciality and his personal favourite. Bols gin is infused with fennel seed and cardamom and added to this is lemon juice, orange and mango marmalade, crème de cassis and topped up with a touch of tonic water. Break it down and it’s a fancy gin and tonic, and it certainly looks the part. For me, the drink is far too sweet, the marmalade and the cassis drowning the flavours of the fennel and cardamom. I wanted those subtle spices to be the star of the show and in the words of John Torode, there are too many ingredients. 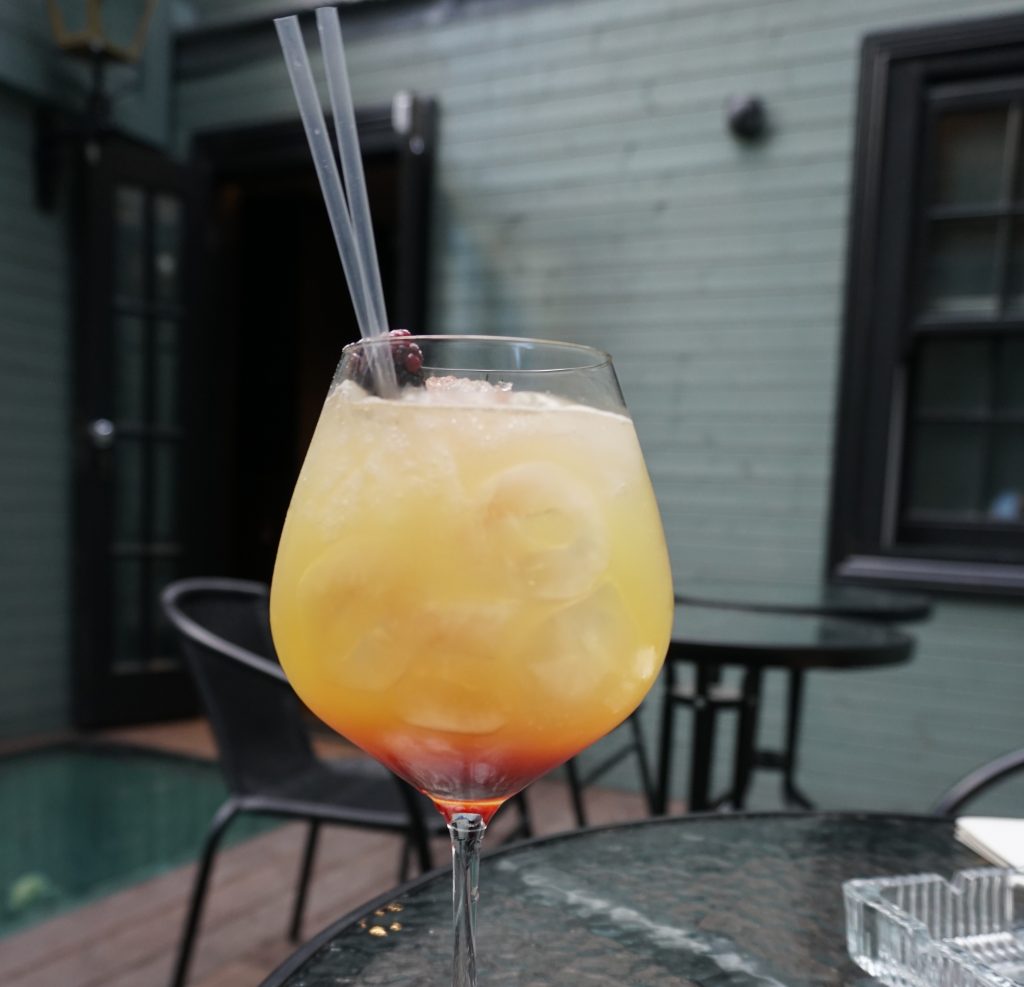 Second on the list is ‘like a bird’, which is all about the theatrics and the presentation. The drink comes served in a glass bird which hangs inside a metal cage. Once you’ve taken countless photos and a boomerang of the door of the cage opening and closing, you take the drink out and set it on a little pillow. The bird is filled with Hendrick’s gin, blood orange, organic white wine, orgeat syrup and peach liquer. A Google search tells me that orgeat syrup is made from sugar, almonds and rose. Reading this you’ll probably notice two things, the first is that I like gin and the second, this list of ingredients also makes for another sweet drink. Thankfully the flavours are a lot subtler and everything gets its moment in the spotlight, although I will admit, I couldn’t identify the almond. 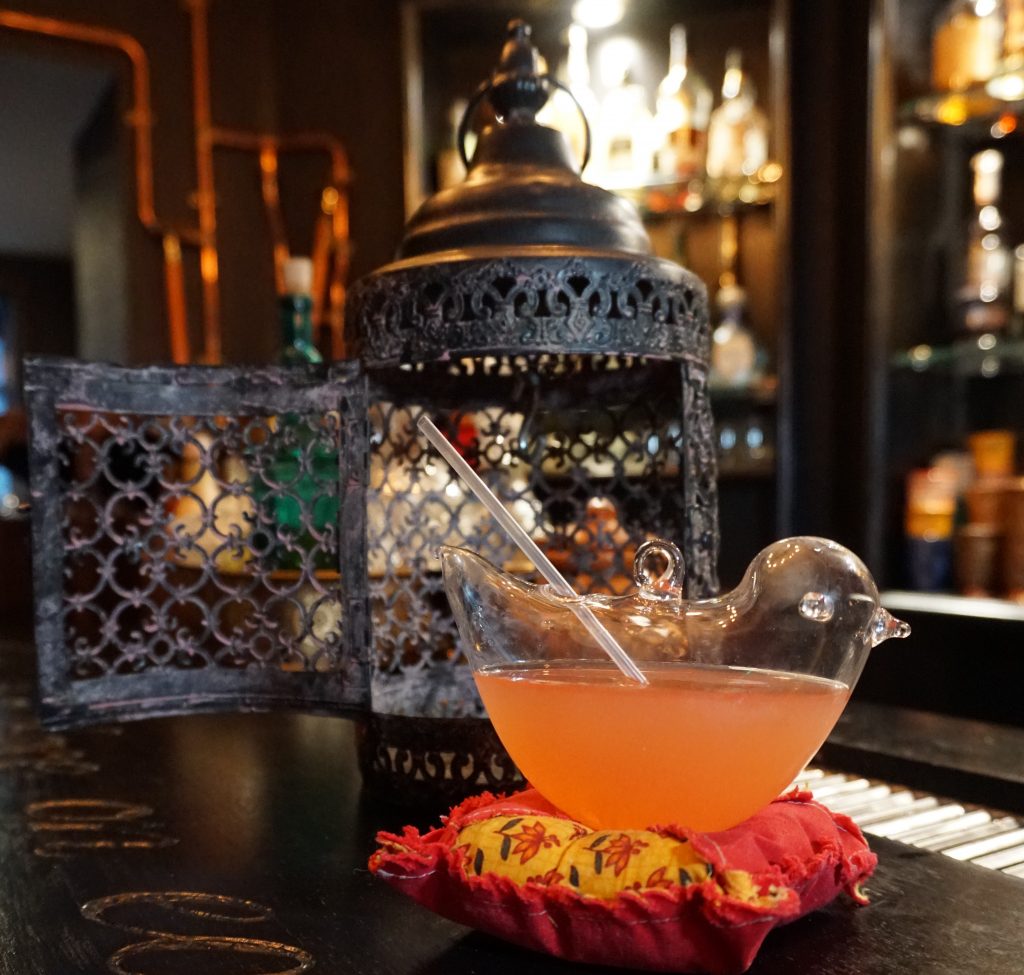 Two further drinks followed but they are now off the menu and I cannot remember the details unfortunately, although they were good to drink. Of-course there was gin involved and I know there was coriander which I detest, but here it actually tasted nice pleasant. Also, well done to Vijay’s Lounge for using paper straws, you’re doing your bit.

So, what do I make of VL? The first thing that struck me was the lack of people. On a warm Thursday evening, not a single person was in the bar or on the terrace. Down the road however, Vinoteca, Charlotte Street Hotel and the terrace at The Ninth were all overflowing with people, glass in hand. Of course I savoured every minute of it, having a terrace to yourself is a rarity you grab with both hands. For me, if you’re only going to offer six cocktails, you have to make sure they are absolutely exceptional, they need to make the drinker wonder why it took them so long to try them and unfortunately, it just doesn’t do that. As great as the bartender was as a person, he wasn’t a mixologist by trade and drinks were made by referring to a recipe on an iPad. Someone who works behind the bar in this sort of establishment puts their personal touch on the drinks and makes up something if the patron decides to venture off the menu, here I just didn’t have the confidence to do so. The concept and the story are great, the selection of spirits is commendable but the competition in London is just far superior.

These drinks were provided free of charge by Lokhandwala