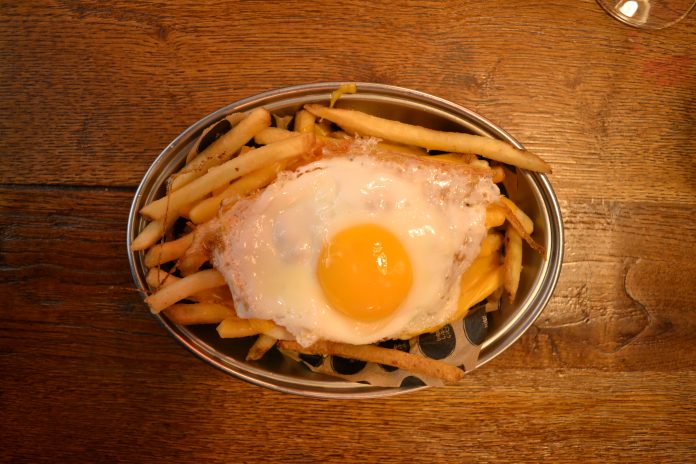 Gone are the days where a bottomless brunch was an occasion, something you’d book in advance because it was a rarity. Nowadays, I really wouldn’t be shocked if your local Chinese started doing one. Absolutely everywhere seems to think that they can lure you in with cheap mimosas and that subsequently, you’ll be so drunk, you won’t notice that your poached eggs have a yolk so solid they might as well be hard boiled. I think the trend of bottomless brunching will go down in the history books as something that millennials will be defined by. We will happily pay £10 for some smashed avocado on toast and then walk round as if we rent the place. 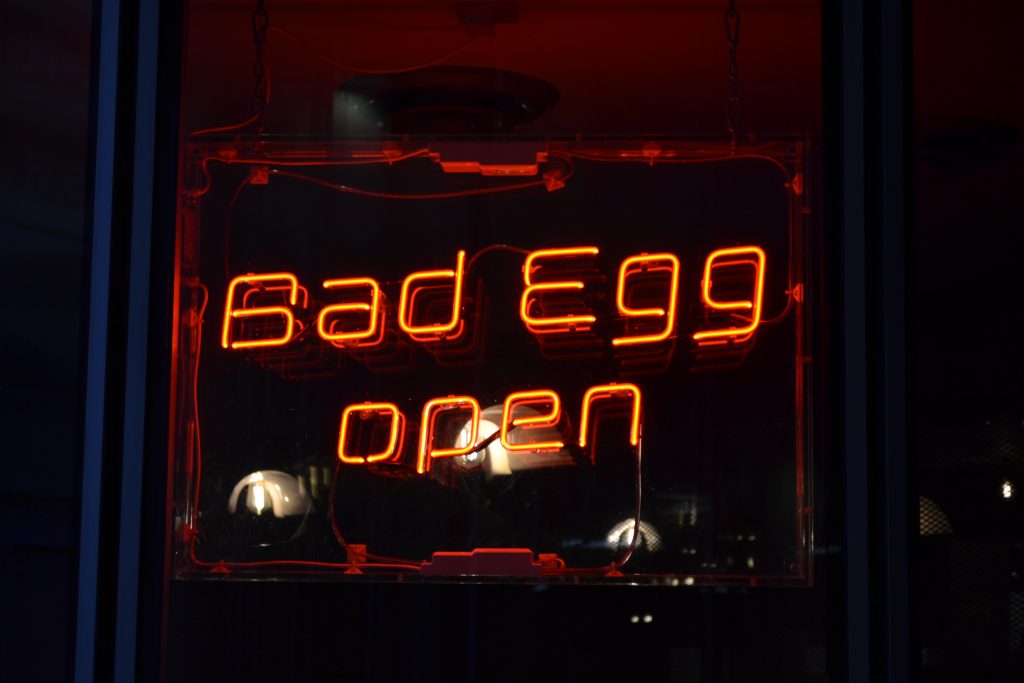 Enter Bad Egg. The place that has introduced the concept of frunch because a standard weekend brunch is no longer unique enough. I assume this is aimed entirely at tourists and the self-employed because I’m not sure I know anyone who would still be employed on Monday if they showed up to work having taken a two-hour lunch break in which they got absolutely plastered. All of this aside, let’s focus on the weekend brunch they offer up. For £35 you get a choice of two plates from the smaller, bigger and sweet sections. You also get bottomless prosecco, mimosas and bloody marys. Not so long ago, £30 would have got you three plates instead of two. 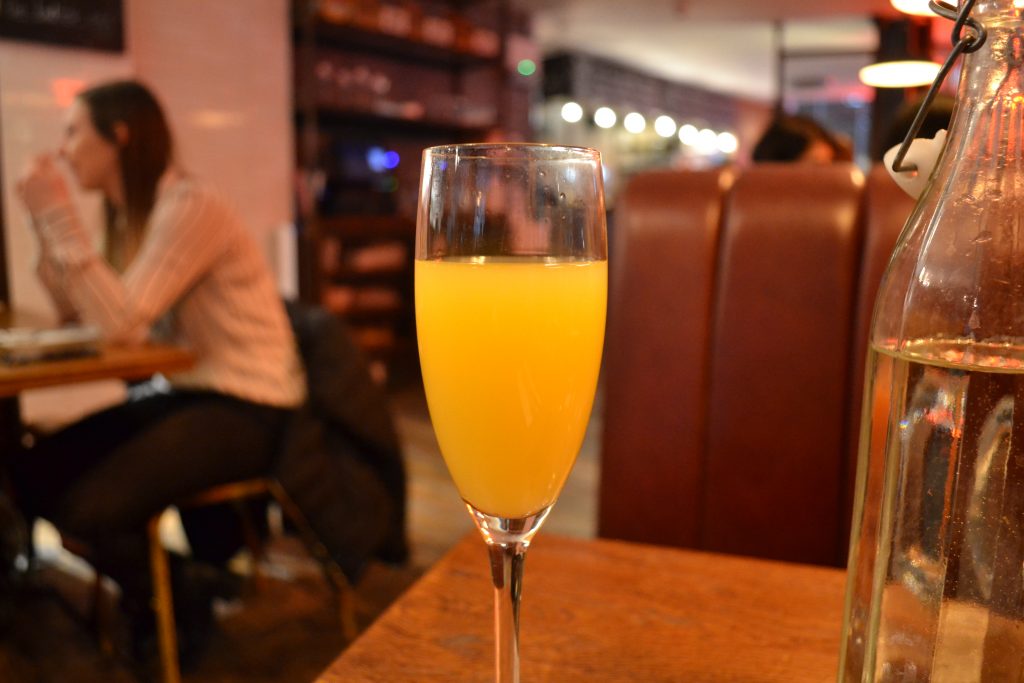 For me, bottomless means bottomless. For our waitress however, it meant a stern warning after my fourth mimosa in 15 minutes that they encourage responsible drinking. That’s like going to a pizzzeria and the pizzolo telling you to not eat too much cheese because they are concerned about your cholesterol levels. I’m sorry, but if you’ve sold me on the premise of unlimited drinks, I’m going to drink as much as I can handle and quite possibly, more. Besides, 4 flutes of mainly orange juice aren’t going to get me drunk, they will just rot my teeth.

The food menu offers your typical french toast, pancakes or avocado on toast as well a range of the not so classics including mac n cheese balls and breakfast tacos. If you’re a vegan, I would probably stop reading now because there is not a single option on this menu for you. The fries topped with cheese and a fried egg would be something you’d inhale after a night out and feel good about yourself for not eating a terrible pizza. On a Sunday afternoon it’s a little different, the last thing you want is cheese that’s already gone hard by the time it’s reached your table. Cheese aside, the other two elements of the dish weren’t so bad. The chips were thin and managed to retain a little crunch and the egg had a perfectly runny yolk. 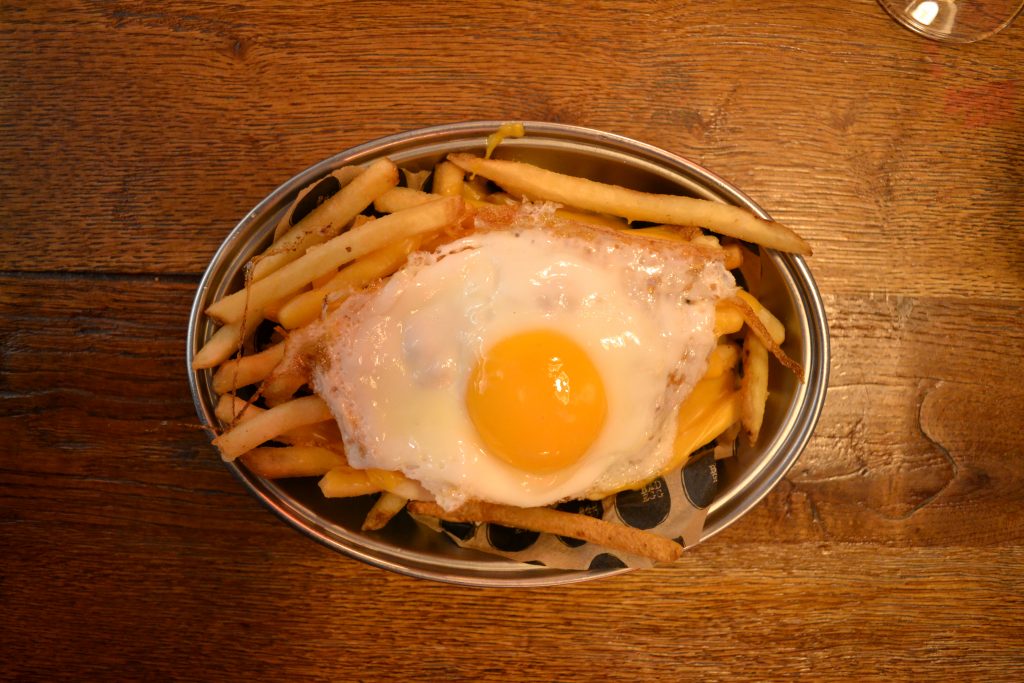 The guacamole on toast is as you’d expect. The avocado fortunately was not smashed into a pulp and was seasoned well enough. I’m not sure what the chives were doing on top but I supposed the dish has become so common, you have to find a way to make yours stand out. Two eggs are also a rare but very welcome site, most places give you one and then charge you if you want another.

The macanchini was neither here nor there. 5 little bites of deep fried lacklustre mac n cheese. I wanted the cheese to be oozing out and the pasta to be al dente, but at the same time, it is deep fried cheese, it’s hard to dislike. The chipotle aioli was probably the stand out item of the day. Punchy with hits of garlic and the chipotle spice tickling the back of your throat. 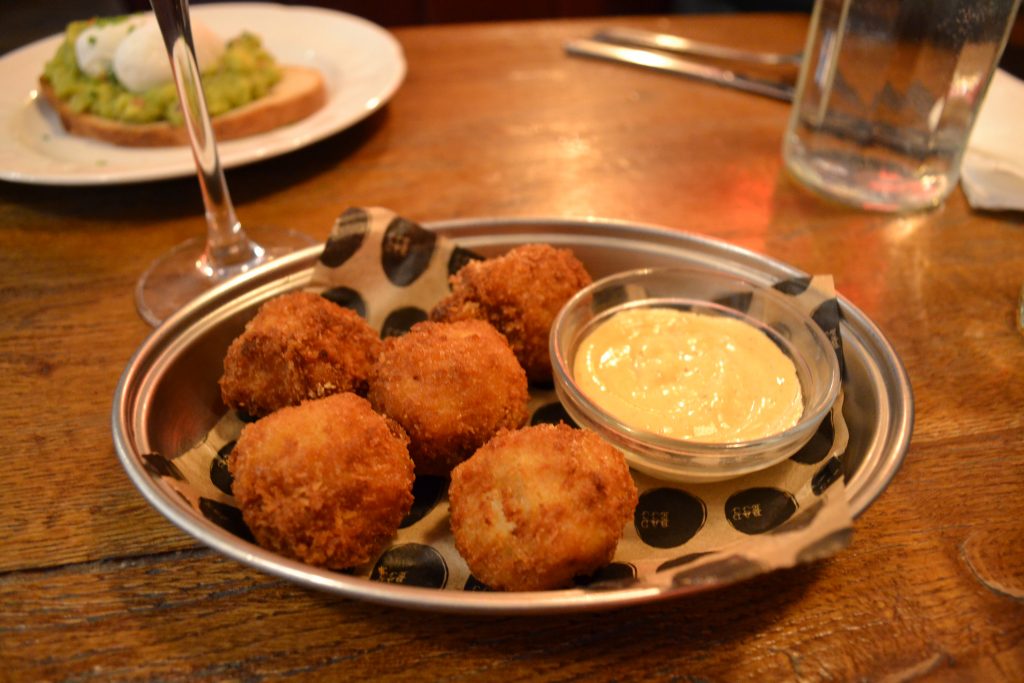 Last up were the pancakes with jam and vanilla cream. I’m not quite sure whether it was a pancake or a crêpe, but whatever it is, you get a stack of 3 topped with a thick layer of jam and a hefty scoop of vanilla cream. This is proper American diner style food, no refinement and all calories and refined sugar. Even as an avid dessert lover, I could not finish the whole portion, it was just far too sweet. That isn’t an error on behalf of Bad Egg, for it does exactly as it says on the tin (metaphorical tin that is, they have regular menus).

I want to like Bad Egg, I really do, because it comes to highly praised, because the interior of exposed lights bulbs works without trying too hard and because unlimited mimosas should always be a good time. The problem is, I can’t ignore the bad food, the price and I most certainly cannot ignore being told how much I am allowed to drink. As I said at the start though, bottomless brunch is as common as a London bus and so I have plenty of options to try before having to return here. 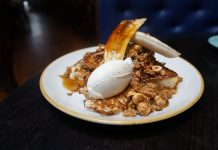 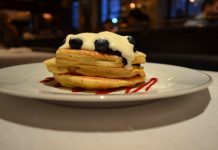